So the other day, I bought a new phone, the LG MyTouch. 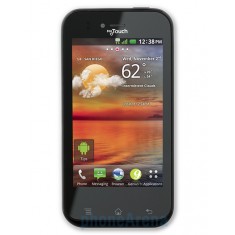 It is a really nice phone...at least compared to the LG Optimus T I was using. I was considering the MyTouch Q because of the slideout keypad which I miss. I prefer the physical keypad to touchscreen keypad. However, when I looked up the specs for the phones, the MyTouch had far better specs for both phones being the same price. Really, the difference is the MyTouch has 3.8" 480x800px screen while the Q has 3.5" 320x480, and the MyTouch also has a front camera for video chat. I prefered to have the higher quality screen over the keypad.

So far I love the phone, however I have noticed a few little...bugs. I had an issue with txt messaging where I couldn't type. It only happened once, and I had to exit messaging and open again. It runs a lot smoother than my Optimus did but at times still lags as I believe most android phones do regardless.

The physical design is what I really liked the most about the phone. All black, nice rounded corners and one of the first phones that has a cover for the micro usb port. My Blackberry didn't have one, and neither did my LG Optimus. The one flaw I have with the phone is the battery cover. It seems like it would come off easily and doesn't close flush at the bottom (intentional design I believe) which bothers me.

I bought the screen protector to put on it, and have never put on on a phone before. After attempting to put it on, I threw them away. It came with two and each time they got stuff on them that you can't get off and is extremely noticeable when you have the screen protector in place and I couldn't stand that. It's a little like those idiots that did their own window tinting on their cars and the tinting is littered with air bubbles. I didn't do nearly as bad a job, it was only 1 or two spots because it got a spec of dust on it. Pisses me off, considering the price of the screen protector.

To see the specs on the phone... http://www.phonescoop.com/phones/phone.php?p=3374
Posted by systemAdmin at 4:53 AM No comments: