Been playing this game for about two weeks now. I personally love the game. It's been getting mixed reviews from my fellow gamer friends though. It was officially released on April 4th (I think). However, it still seems very much in beta though. There were some "issues" with the release patch for the game that hopefully is being resolved with tonight's patch.

Blacklight is Free 2 Play. You play to gain GP to buy weapon upgrades (mods) to modify how the weapon works (or Armor and equipment also). I think it's well balanced as far as the modifications go. Each mod positively affects one part of the gun, but also has a negative affect.

The graphics are amazing for a f2p game. It has CTF, DOMination, DM, TDM, and TKOTH (Team King of The Hill. Servers support up to 16 players per match. It also has HardSuits (mechs), which are fun to get and kill people with. Makes the game a little bit different.

As with most FPS games, the issues of cheating (hacks) comes into play here, but so far it hasn't been that bad. There are some really good players, and I've come across 2 or so "official" hackers. The game implements Punkbuster which effectively does nothing against hacks. 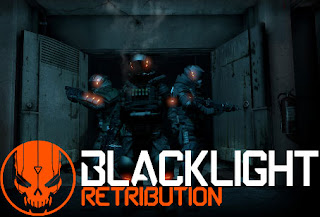 Posted by systemAdmin at 1:48 AM No comments: