Just one small step towards censoring the search results. It all starts with censoring search suggestions. I for one am glad I still get suggestions on how to build bombs and make mustard gas. That stuff will be INVALUABLE when we need to go to war against the corporations when we are working slave labor again and everything the corporations(aka the government) deems inappropriate/wrong/illegal/etc is censored.

What ever happened to the slogan, "Don't be evil"?
Posted by systemAdmin at 3:41 PM 4 comments: 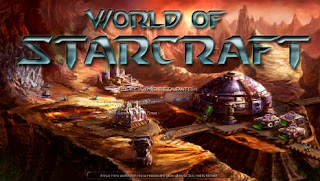 Now called Starcraft Universe due to copyright. It's a Starcraft II mod.
Posted by systemAdmin at 11:25 PM 3 comments:

Now if you read it, it's not Apple itself that has bad working conditions, but completely different companies that just happen to have contracts with Apple. So how is Apple is actually responsible? That's beside the fact that china is known for having terrible working conditions in their companies to begin with anyway...

If a company can't supply a product at the price and quality that another company wants, then they shouldn't be providing that product. Simple enough. If I tell a company that I will work for $3 an hour and get the job, do you call me an idiot, or the company a terrible company?

And what normal person commits suicide before quitting their job anyway? If anything, they are doing the world a favor by not being able to spawn more idiots. I understand people may have different ideals and whatnot, but still. Suicide?

At least I know being an complete idiot isn't limited to Americans.
Posted by systemAdmin at 12:57 AM 5 comments:

A blog I just found. I like the latest post. Didn't actually read the rest so I can't say all the posts are good or anything. The post makes a couple good points so I thought I would share. I know most of us probably already know and or agree with the points also.


As far as my thoughts on how government should be run, currently, I believe the only things the government (the US government, not necessarily state government) should be responsible for is:

The individual states should be responsible for running public programs, taxes, similar things. Why? Because they would have competition with each other. The US government does not. So in the same way that having different companies making similar products which keeps prices as low as possible and run as efficiently as possible (typically...damn greedy management bastards), the same should occur with the states. Certainly the way the states are run should be fixed first of course. We wouldn't want corporations paying off the state government to get what they want like they do now. We would need true transparency.

Those are my views. Hell, I'm pretty sure (as far as the US government) that those were the views of our founding fathers, or at least very similar. Enjoy.