A Matter of Time

I'm losing hope that anything will or even can get better for America.

Hopefully I'm wrong to think that people won't care enough to do anything.

The issue is, everyone is too comfortable. They still have something to lose. We still have money, as worthless as it is becoming, and homes, and families, and possibly most importantly...entertainment. As long as people are entertained, they don't have the will or desire to pursue issues with whats wrong with this country. All they care about is being entertained.

With each generation, things get worse and worse though. Nobody stops to consider what the next generation is losing, because it's not that big of a deal, and it's only a small thing this time around. And the problem with that next generation is, they won't miss it because they never had it. Then that generation is comfortable with how everything is, they only see what they have as normal, then something else is taken away. But it's not enough to incite anyone to action. And the previous generation? They're old and only trying to take care of themselves and incapable of doing anything. Another generation comes along that has even less...but they never had the things the previous generations had so they don't know what they are missing either. It's a downward trend, and one that a government given enough time can use to take every last shred of freedom from people without anyone doing anything to stop it.

It is a slow decay. We've gone from one generation where a president doing surveillance on someone gets them impeached, to where a president does surveillance on everyone and nothing happens. We've lost privacy. We've lost security. We're losing, if not lost already, our freedom of speech. And people don't really notice. What is noticed? Facebook Messenger permissions.

So far, the one freedom anyone seems to really be fighting for is the second amendment, the right to bear arms. Given enough time, perhaps we would have seen a generation that didn't really use guns, and wouldn't have had an issue losing them. There are many countries already that have outlawed firearms. It only makes sense that the US will one day do the same. As people continue to fight to keep their right to bear arms, nobody seems to be fighting to prevent schools and the media from teaching our kids that guns are evil and bad...and one day they will be the ones deciding whether we keep that right or not. 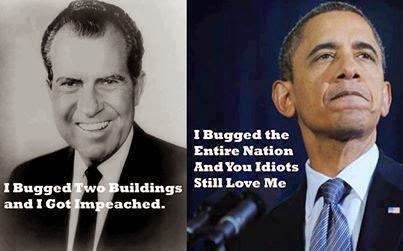 Posted by systemAdmin at 8:27 AM