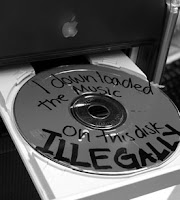 But according to some people, is damaging the music industry.

In reality, the music industry is hurting itself. 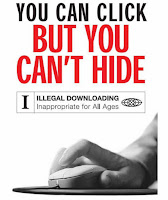 The only things that the music industry is failing at, is selling hard copies. CD's.

Which makes sense, when you can simply pay less online.

Online, you can buy the songs you wont from an album and not waste money on songs you don't.

Taking illegal down-loaders to court costs the music industry more money then they get from it.

This new post about illegal downloading is the prompting of a band I like that was complaining about illegal downloads on facebook. Apparently 2 million copies of one of their albums was downloaded illegally and they are releasing a new album on tuesday. This means their band is being heard by many many people that may not have heard them otherwise. Even more, they actually said that THEY specifically do not make any money from the CD sales. So for the band, they actually get more out of illegal downloading. : /

It's only a matter of time, and perhaps we won't be downloading "illegally" but instead sharing freely in order to promote bands. Many bands are already against the recording industry and for music sharing. I think I posted about illegal downloading already...but oh well. This time I have links. Also, the band I was talking about is RED.

Posted by systemAdmin at 3:01 AM