The Issue With CP 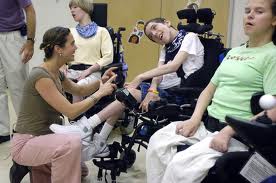 I just watched the news. They had a news story about CP (Cerebral Palsy). The issue they were discussing was the ethical issues of what is called the Ashley Procedure. Basically a procedure to stunt the growth and natural development.

Read about the procedure here

They prevented the procedure because it may not be in the child's best interest to stunt their natural development. However, considering they won't be doing anything useful or purposeful in their life, I don't see how making it easier to care for them an ethical issue. It's like caring for a vegetable (I mean a person that is a vegetable, not a literal vegetable), they aren't able to do anything themselves.

If a dog was unable to do anything though, you would put them out of their misery. But because it's a person, we keep them alive to be unable to do anything for some odd reason. Why allow one person that will never do anything but be a burden, well, be a burden? Sure, I know, I don't see it the way the parents do because I don't have a CP kid. But that's why I'm able to look at it from a completely logical view. The pointless decisions people make to keep people going that have no ability to do anything or even want to end it all because they don't want to suffer the rest of their lives is just stupid.

If the CP is bad enough, show some real compassion, put them down. If I was irreversibly a vegetable, put me down please. It's like pruning a bush or fruit tree. You cut off the dead burdening branches to allow the rest to grow stronger. In the wild, it would be called natural selection. Or maybe I'm just a sociopath.