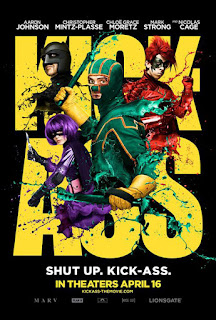 So I just watched Kick-Ass. Saw it in theaters when it came out, and it was epic. So I just watched it again. I think the movie had a good point though. People are extremely passive, and won't try to help anyone. I don't think it's always been that way. But that is how it is today.

I don't really blame anyone for not helping people in general. There was an episode of Frasier that made that reason clear. I don't know the episode name or anything, but Frasier had stopped to help a guy change a flat tire. The guy later called into the show because he wanted to sue him because his cuff-lings scratched his car. The moral of the story? Don't help anyone or they will sue you. This holds true of not helping people also now. If you don't help someone, they might try to sue you. Take the fountain lady for instance. Technically not suing because nobody helped, but because they posted the video, but the fact is, you would have NO IDEA who it was if she didn't make it onto TV about the incident. Somehow, this also hurts the concept of free speech. Sure, uploading the video might not be speech per say, but when you go into a public place, you take that chance that someone might catch you doing something stupid and upload it.

Then you have groups like scientology and the Westboro Batist Church who sue anyone that offends them. Thanks to the American Justice fail system, groups like these can destroy your life (legal fees from 100's of frivolous law suits). It seems, these days, like anyone can sue anyone for just about anything, whether it's considered common sense or not. Even worse is the lawyers who do the suing. They are a bunch of greedy bastards.


Are people really so greedy that you can't help or even not help them without them trying to sue you?

What the f*ck is wrong with people?


So some more interesting stuff relating more to the last post...
http://americaisretarded.com/  - It was vaguely interesting.
http://chinadivide.com/2010/stupid-americans-send-them-to-china.html - This article seems to understand the issue
Posted by systemAdmin at 7:43 PM