Feminism Will Be The Fall Of Civilization 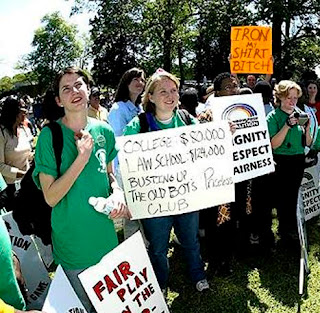 As a sorta followup to the previous post I shall discuss my view on Feminism.

Obviously feminism is a bad thing, obviously. It is tearing down the basic model society has lived in for centuries. Feminism has created an unbalanced economic state as well. I'll discuss that first.

At one point in time, families consisted of a husband that worked to provide for his family while the wife raised the children and maintained the home. With the advent of feminism, both men and women now work, and not only that, they both have to work to provide for the family now. Follow me on this. Business, being as greedy as it is, realizes the increase in the family income by having two working adults instead of just one. It may not be twice the income, but it can be a significant increase. This would mean that families are more capable of paying higher prices for the goods they need. See Inflation. I know there are a lot of other factors, but I feel this is an important factor.

A single person, at minimum wage would never be able to afford a new car, rent, and other necessities of life, at least not alone. I know I personally couldn't do it when I was stupid enough to buy a brand new car and was making ~$15 an hour. However, if I was married or living with a significant other, it would be plausible.

Women have fought for the right to be able to work and support themselves. This brings up another issue. This helps create more unemployment. I'm not positive the ratio of men to women, but I'll assume for the sake of the argument, that women working doubles the available workforce. You don't have to be an idiot to realize the difficulty this introduces in anyone finding a decent job. So now, not only are prices on everything inflated to accommodate the increased family income, it's also twice as difficult to find a decent job.

Who will think of the children?!?!? Now they have gone as far to really screw over businesses as well. Women get pregnant, they get to be PAID to not work to have a baby. That's not equality at all. Men don't get paid to leave work to have a baby. But aside from that, who is raising these children while the father and mother is at work?! Women have a natural and built in functions to raise children. There is such a thing as equality, but it doesn't and shouldn't apply to EVERYTHING. Women have an obligation to raise their kids. They don't and those kids end up in daycare being raised by someone else. Daycare is also expensive. So a woman that wants to work, simply to pay for daycare, well, your are one screwed up bitch. Sorry, I mean feminist. Go equality! Woooo!

How feminism ruins marriages and even relationships. The overall idea is, so long as a woman is able to work, she no longer needs to find a man that is able to support her. She is now open to simply find a "boy toy" and work to pay for herself and what she wants instead. The status quo is no longer about success, but looking good and being entertaining enough to find a mate. Sure, there are still women out there who are gold diggers, I mean, who really wants work if they don't have to? But, the point is, women don't look for successful men, they look for eye candy. With this, you end up with a lot of people settling for what they can get because not everyone is desirable, no matter how successful anymore(except to gold diggers). So once the women get past the point of wanting a "boy toy" or "eye candy" they realize that the man really isn't worth being with. And on the opposite side, men naturally want women that they can be protective of, to provide for, etc. So they end up with the women that are lazy and don't want to work...or do anything. Basically, women that are worthless aside from eye candy. That that. I'm pretty sure feminism also helps promote homosexuality because of these issues. Not every relationship is a failure of course, but I think the degradation of relationships and marriage can be related to feminism.

So in conclusion... Congratulations feminists! You have successfully screwed over civilization. I hope you are happy. When everything finally comes crashing down, all you can do is blame yourselves.
Posted by systemAdmin at 11:27 AM