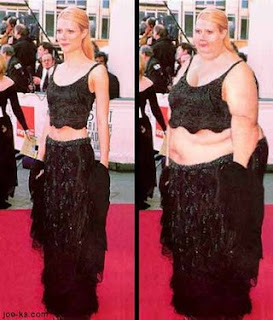 Shallow is a term meaning you have little depth. On the show Seinfield, the characters were all shallow. Jerry would constantly find the smallest flaw in someone, and it would ruin the entire relationship possibility, like man hands, or two face (assuming you are familiar with the show and those references).

Now the issue I want to actually discuss is the movement to change and broaden the meaning of being shallow. Obese women have taken up a movement  to change the way people think by changing the terms and ideas with which we associate and think. And when a big enough group (pun intended) get together, it starts to happen. For instance, we now have the terms "more to love" and "BBW"(Big beautiful woman).  But the real issue I have, is with the issue of being shallow and the attempt to make it so if you are not attracted to an obese women, you are therefore shallow. I argue against that specifically because attraction is nothing to do with depth, it is merely a single persons opinion of another's looks, or size in this case.

Relationships require two things, a connection, and attraction. Arguing that if you have an connection with someone that you should automatically have an attraction otherwise you're shallow, is a weak argument. Small things like funny looking thumbs, or a crooked nose, that would fit with shallow. Nobody is perfect, and those are relatively small things and not something that can be specifically changed. Weight however, can be changed with exercise and not stuffing your face with food. Granted there are some cases where its a medical condition that causes weight gain, but that's beside the point.

Now the other issue I have is that instead of trying to lose weight, they have chosen to simply try to change societies outlook on bigger (obese) women. Obesity is NOT healthy, and is in their best interest to lose the weight. However, they have chosen to "empower" big women to believe they are "beautiful" no matter what. Considering the percentage of obese people (in the US anyway), this may become a reality simply because everyone IS obese...and naturally, you are attracted to what you grow up with, ie: black people and black people, sheep and sheep, skinny people and skinny people, big people and big people...etc. Not the best example, but I hope it makes a point. I mean, there are those who prefer something different, like a mixed couple, or mixed weight couple...but anyway.

Outside of being shallow for not being attracted to obese people, the other thing want to try and change is how they are dealt with when it comes to business and other. The specific issue, if you remember, is the woman that was charged for two seats on an airplane because she was obese. This isn't because you are obese, its because you are literally taking up two seats. It's not the airplanes fault you over eat and under excersize, so why take it out on the plane? You are being charged two seats because that is how many you are using. Seriously, if you have an issue with that, lose some weight. Don't try to change the airlines policy. The same reason you don't get paid insurance because you chose to burn down your house is the same reason businesses shouldn't have to accommodate you because you chose to eat excessively. (granted, bad parenting may have something to do with it also) The only obese people that should be accommodated are those with actual medical conditions causing it. It's not within their power to change it, but it is within yours to change your weight.

I just want people to open their eyes to what's really going on. You are all being brain washed by the media and Oprah. The media is an odd one. They used to be all about skinny and beautiful, but ended up switching to appease the obese. So it's more of a mix now. And they also have movies about it (like Shallow Hal). Think about it though, have you not thought about the idea of being shallow a little more recently?

I understand why this has started. As kids, I'm more then positive they were ridiculed and tormented for their weight, as most kids are for anything that they can be tormented for. But rather than fight against the tormenting and ridicule, they have chosen to make it completely acceptable, if not desirable. Not that it has happened yet, but give an idea long enough to be well seeded in your minds and it will. I personally believe that kids being mean to other kids is something that needs to be changed. Not only kids but adults as well. There needs to be a huge change when it comes to the way people interact and treat each other. But that's another post.
Posted by systemAdmin at 8:18 AM