Are We Totalitarian Yet?

Buckaroopopcorn: Are We Totalitarian Yet?: "The system of police is that system by which we confine ourselves. It can be through police violence, media propaganda, mental illness, the ..." 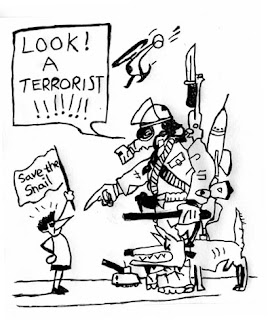 I completely agree with this above post. Unfortunately it may be a little outside of my ability to "dumb" the concept down to a more comprehensible version for the sheeple. So I'll write my ideas pertaining to that post. If you have seen the movie 1984 (I have, it was actually kinda boring) or read the book 1984, that is where we are headed. More or less.

Now to put the post into simple terms I can think of, the police and government has become like skynet. It is not a person, but a thing that is growing and not entirely within control of anyone anymore. It will become more powerful and attempt to enslave us all. You are all the mindless drones (sheeple) that follow the rules because you believe you have to. And slowly, the government(skynet) is implementing new laws and forms of control (terminators) that will keep you from expressing free thought, or having any freedom at all.

Another good example, would be V for Vendetta. The method for how they arrived at the society they did may not be the same way we are going, but the end result seems pretty similar. Although, considering how things are going, perhaps it is very much similar. Remember 9/11. Government or Terrorist, either way it was used to introduce the Homeland Security Act which gives the government the ability to barge into anyone's home/business/etc and disguised as a method for "protecting" American citizens from terrorists. And the sheeple will sit idly by and mindlessly believe everything they are told while those who stand up and speak against it are branded as conspiracy theorists and terrorists.

The terms political correctness is also a method used for controlling the masses. It helps to slowly erode away free speech. You can no longer say certain things unless it's within the boundary of political correctness, and if you step outside of those imaginary bounds you will face the consequences. They have already started the attacks against freedom on the internet with Combating Online Infringement and Counterfeits Act (COICA). This is the start of laws that will allow them to censor the internet, starting with what they loosely define as "infringing" material. The proof is history. Look at where we where and where we are now.

They don't have to control everyone, just a majority. They use fear to do it. Fear of terrorism, criminals, malcontents, fear of non-conformity. They already control the majority, because those who would be willing to stand up against it, are to afraid, and those who do are deemed terrorists or non-conformists (rabble rousers? I know there is a term besides terrorist or non-conformist that I want to use, I just can't actually think of it. I've been called it for my own ideas before.). The rest all blindly believe its for the better good of everyone...sheeple.

*EDIT: So I had thought about history and how we are today, couldn't sleep last night, and one thing that I find important for totalitarianism to take over is making people reliant on the government, specifically for protection but other things help. At one point, we relied on ourselves and each other for protection. We had to have our own guns and know how to use them. Now, if you try to defend yourself, you're more likely to be arrested if you're actually successful. If not arrested, sued. It's created a reliance on the police to defend and protect you...a group that is directly controlled by the government. And you know how they talk about gun laws, and banning guns? That's taking away your ability to stand up and form a militia against the governments military/police force when you've finally realized just how bad things have become. Think about that. Seriously. 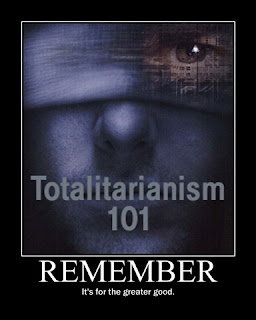 Posted by systemAdmin at 7:51 AM